I fancied a quick get away, and thought it was time to catch up with friends in the Lakes.

What a lazy month January has been, I figured, after the #festive500 I was ready for a break. I was feeling a bit tired, underweight, then I picked up a bug, which laid me up for a short stint prior to this trip. I must admit, shivering in bed on the Saturday, I wondered if it was going to happen the following Thursday.

I arrived in Levens at lunchtime on Thursday, the weather was dry, no wind and a perfect afternoon for a spin. I couldn’t check-in to my B&B yet, so I got my bike out, got changed and we headed for the flats. A big chunk of the area under Levens is actually below sea level, so is constantly pumped, to keep the water out. This means it was a nice easy start 6km, then the climbing begins, short and sweet 4km and only 100m and still on road.

We quickly lose the 100m just in time to take on the 250m, 6km climb through Cartmel Fell and Bowland Bridge up to Gummer’s How. I understand that there is a good view from here, but by the time we reach the top, the visibility is next to zero. As we start to descend, we take a sharp left in to the forest where the fog is making the atmosphere very eery. We hit the loose surface on the forest trail and the trees start appearing out of the gloom, only visible when you are almost on top of them. Suddenly, we descend rapidly, down to the lake shore near Newby Bridge and the visibility starts to improve. That was brilliant!

A short ride along the cycle path at the edge of the A590, then a left turn and we are back on the small roads climbing again, this time up to 160m, through High Newton and on to Tow Top, over the brow and onto a fast, tight, sketchy 20% descent, then on to the flats again. The route now runs below the fell, but visibility is so low, we cannot see the tops of the hills. We drift along across the flats to Meathop and back towards Levens, taking a small detour across the A590 again to see if we could spot the white Hind, which often appears out of the woods. Sadly, no sighting.

Back to base now for a quick brew, and time to get checked in to the B&B.

Today we have a full day in front of us, the temperature is 60C, so being in the saddle for several hours should not be an issue. We loaded up Gordon’s van and drove up to Brathay, just west of Ambleside and parked up near the River Brathay. Once we had got togged up, and with a route in mind, we started out west through Skelwith Bridge, initially on the A593, then we dropped on to the cycle path, which ran along the edge of the River Brathay. 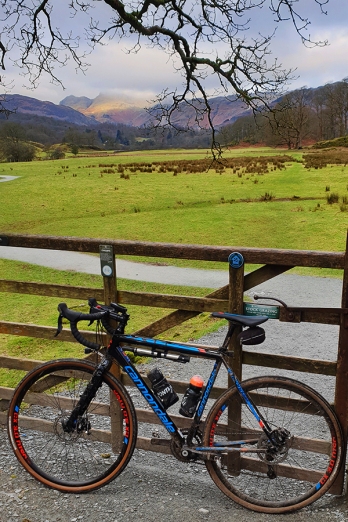 This is such a lovely route past Elterwater, at which point the road starts to climb up to the quarry at about 130m. After the quarry, the trail drops down through Birch Hill Woods, rolling up and down as we head towards Park Coppice and the A593 again. The road is now starting to roll uphill, steadily through Whelpers Woods, Bull Close Coppice, then past the Drunken Duck, heading in the direction of Hawkshead Hill.

Before we reach the top of Hawkshead HIll, we take a right turn, which leads us up to Tarn Hows, a climb well worth taking as the view is spectacular. 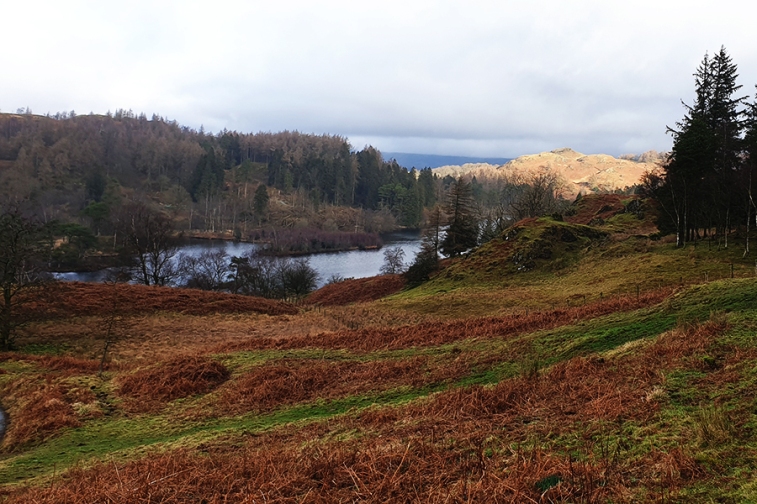 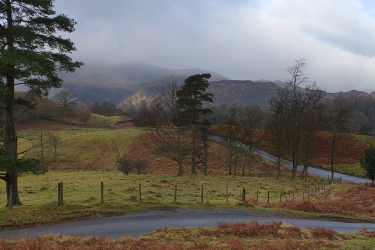 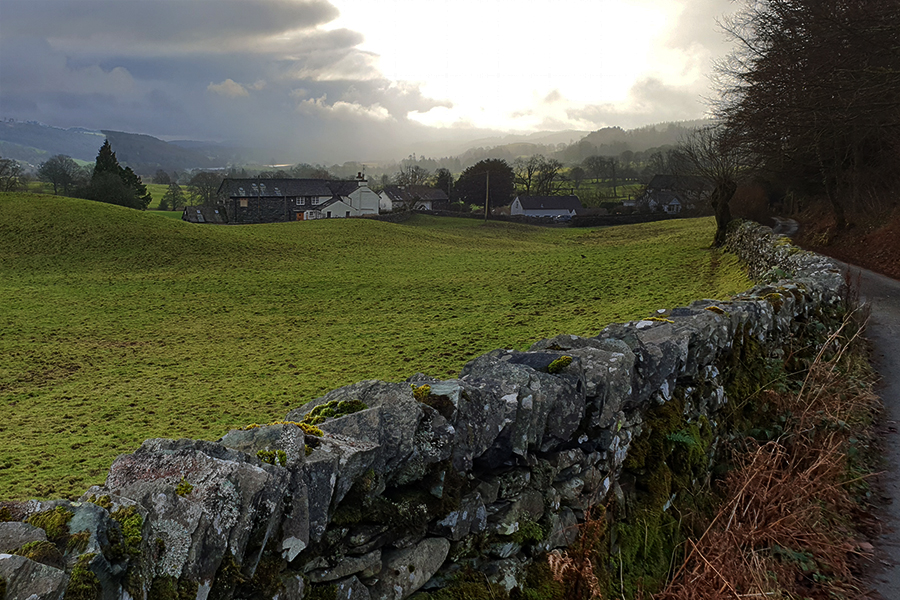 After a few photos, we dropped back down to the junction where we had turned, then take a right heading up to the B5285. It is at this junction we cross over and enter Grizedale Forest, where we spend an hour riding 15km up and down the forest roads, taking a right, then a left, looping about and having a great time. We finally drop off the forest trails at the Grizedale visitors centre, where it was time for a well-deserved lunch. 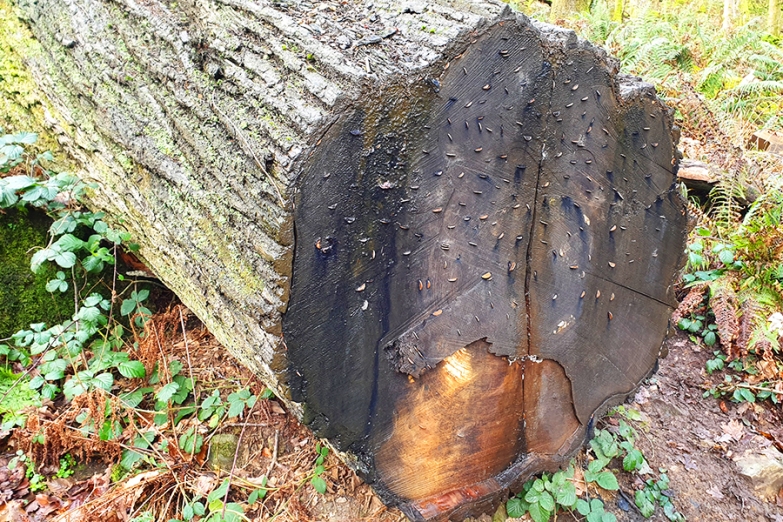 Coins hammered in to trunk for luck

After lunch, we ride over Grizedale Beck then start the long steady climb over to Moor Top, and as with all these climbs, it’s rapidly followed by a roll down, this one towards Esthwaite Water, at Hawkshead. A right turn at the junction takes us along the west side of Esthwaite, until we hit a left turn, up and over to Sawrey. At Sawrey we head right towards the ferry at Lake Windermere, which is a steady 2km climb, through Far Sawrey, then the road drops away in a series of tight twists, leading towards the lake.

Just before we reach the ferry, we slide left at the Claife Viewing Station and pick up the lakeshore trail that runs around the west side of the Windermere. This is a beautiful trail with stunning views, and even though this trail is lake-side, the elevation change is quite dramatic as we work our way up to 90m in places.

The trail runs all the way to Low Wray, but we swing back in land at Red Nab car park and aim for High Wray, following a series of roads across the top until we meet up with the cycle trail off Loanthwaite Lane. This trail carries you over the crest then down towards Blelham Tarn, following hard packed trails around the Tarn and all the way back to Brathay, where it pops out very close to the van.

When we got back to the van, Gordon suggested that, while we were here, we should visit Loughrigg Tarn, and Rydal Water, using the off-road trail, plus it would also give us a great view of Grasmere.

This meant heading back towards Skelwith Bridge again, but this time on the A593, as we need to take a right off the road and climb to Loughrigg Tarn. At the junction we were at 75m, then within 1km we were up to 140m, looking out on to the stunning reflections on the still water. The road takes us up through a couple of tiny hamlets, then as you round the corner the tarn pops in to view. Stunning!

From the tarn we climb further until we crest Loughrigg Fell at 200m. From the summit we could see Grasmere and Rydal Water around 100m below us, and they look spectacular. The bridleway we are on now takes us all the way down past Rydal Water, then along the side of the River Rothey back to where it joins the River Brathay and the location of the parked van. 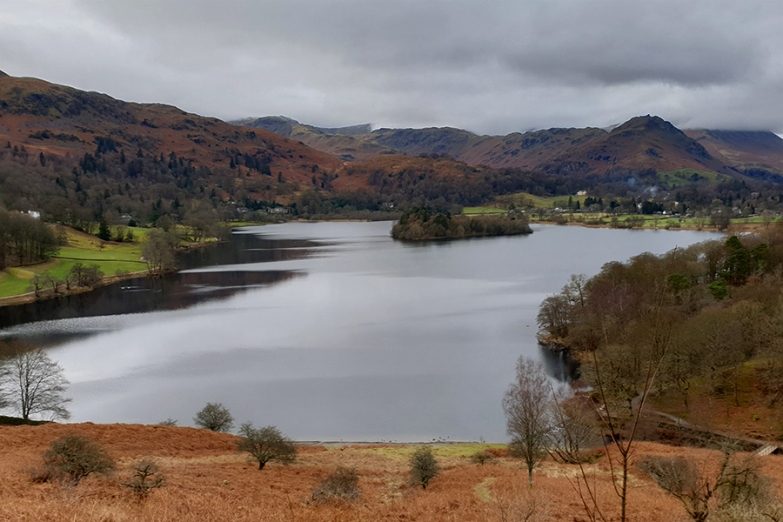 Despite the day being slightly overcast, and quite damp in Grizedale, it has been very memorable, a cracking day out on the bike.

The plan for today was for Gordon and I to meet up with Neil in Levens, then ride the roads out to the Howgills, north east of Levens in the Dales. That was the plan, but due to a dietary issue with Friday nights meal, Gordon had suffered a sleepless night with nausea and headaches, so was “off games”, plus the weather had become very “January in the Lakes”, wet, misty and cold. Not unexpected.

So, Neil worked out a plan to ride in the direction of the lighter skies and we would catch up with Gordon when we returned.

It turned out Neil was on a bit of a mission, riding really strong and putting me through my paces as we headed out east to Crooklands, over the Leasgill climb, at 6% and 2km long. A quick downhill, then the start of the climb up to Old Hutton and beyond, up to 200m in 5km. I was beginning to feel yesterday in my legs and my fat tyres were also taking their toll, but I knew I just had to keep Neil in my sights. Not that easy at the best of times.

It’s raining quite hard now and it’s about 50C, so after 55 minutes the chills are beginning to set in as we drop 150m and 9km into Kirby Lonsdale. As we hit Kirby Lonsdale, we drop into the Lunesdale Bakery for a warm brew. I feel a bit guilty as we splosh through their lovely establishment soaking wet through. We find an empty table with wooden chairs, each with cushions tied to them. We are dripping, so I tilt the cushion up and rest it against my dry back, having taken my waterproof off. It’s only when we leave, I realise how wet we really are and see the damp patch I have left behind. I just hope they realise it was from the rain and not just my old age.

Once we get outside Neil informs me that we were halfway, which at first made me wince, as I was feeling the cold, but it has stopped raining and the temperature is up to 60C, almost summer!

From Kirby Lonsdale we started to head west towards Hutton Roof, a 110m climb over 6km, with a slight headwind off the sea. The views up there are stunning, and I can imagine it is a great place to be in better weather. By now I was starting to warm through, a climb like that will certainly put some heat in. All I had to do was keep Neil in my sights and I would be OK. After Hutton Roof we made our way through Yealand Storrs and on to Silverdale, where we got our first glimpse of the sea.

From Silverdale we rode over Arnside Knot, a 2km climb over 45m and this was our final climb of the day. I will be honest; I was not sad about that today. The cold, heavy bike and tyres had really taken its toll, especially after yesterday’s off-road effort.

After Arnside Knot, we drop into Arnside, run along the edge of the River Kent before heading in land again through Milnthorpe and back up to Levens. I thought I had done reasonably well at drying out and staying reasonable clean today, until that last 5km, and following Neil through the lanes threw up so much mud I looked as if I had been rolling in it. Glad I had a couple of “HazMat” laundry bags for the journey home!

Despite the weather and the change of plans, we still had a great ride and by the time we got back to Gordons he was looking and feeling a little better. Time for a late lunch.

Well, that was a great start to 2020, helping me get my mojo back, having lost my sense of humour on the last days of the Festive500. It felt good to be out on the bike again and inspires me to put some good trips together this year. I hope you enjoyed this short break.